Perhaps Harriett is using her telepathic and telekinetic powers to disable the camera on this Mother’s Day weekend. Perhaps she just wants a little privacy. 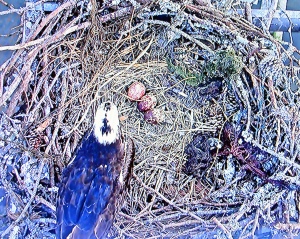 Harriett shows off her 3 eggs

The Doctor tried to contact Harriett regarding this matter. She did not respond to his thought transfer.

Now the Doctor is worried.