It was a Blue-Orange Sunrise this morning. 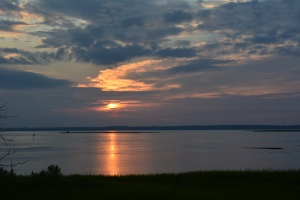 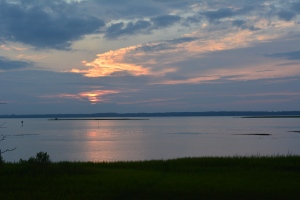 “Harriett? Harriett, are you there?” The Doctor directed his thought, as the osprey flies, straight as an arrow, towards the platform.

Both O & H were perched high, upon their rebuilt home.

O & H slightly out of focus

“Is this as high as we can get?” complained Ozzie. “We are only 12 feet above the water line, for goodness sake.”

“Don’t complain,” enjoined Harriett. “We need to be thankful for the Doctor’s efforts. Besides, rumor has it the Doctor has bought an 8 x 8, 25 foot piling from the Happy Osprey lumber yard.”

“How do you know all this?” Ozzie inquired.

Uncomfortably, Harriett shifted from right talons to left. And then she admitted; “I’ve been monitoring his cell phone calls.”

“You know what I mean, when I say ‘What!’” forewarned Ozzie.

“Are you suggesting I should not have listened in?” (How coy can one get)

Ozzie was not happy.

“Ozzie,” she piped. “I like the way your brown brow stripes furrows at times.”

And………..Harriett skillfully talked her way out of another uncomfortable situation.