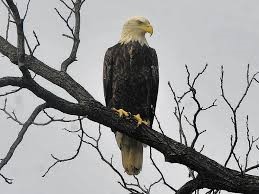 “There’s something going on here, but I don’t know what it is.”

2 Responses to The Eagle