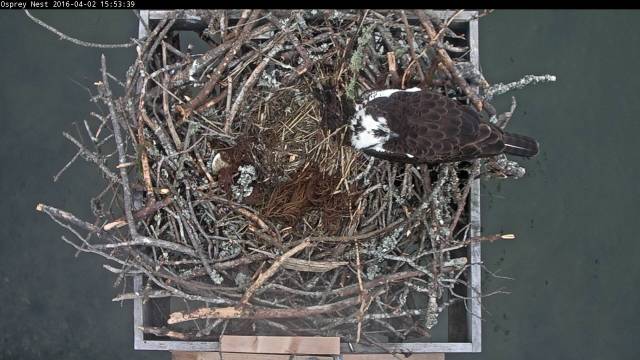 “Can you believe how quickly we constructed our nest this year? We had the foundation, structure and shape completed within 10 days! Ozzie and I sure know how to build a nest. This comes from several years of practice. You may remember our first few attempts. :-). We sure have come a long way since then. Today, as you can see we have started putting in some soft grass and seaweed. Ozzie really seems intent to give justice to the Taj Mahal.”

Ospreys require nest sites in open surroundings for easy approach, with a wide, sturdy base and safety from ground predators (such as raccoons). Nests are usually built on snags, treetops, or crotches between large branches and trunks; on cliffs or human-built platforms. Usually the male finds the site before the female arrives.
Osprey nests are built of sticks and lined with bark, sod, grasses, vines, algae, or flotsam and jetsam. The male usually fetches most of the nesting material—sometimes breaking dead sticks off nearby trees as he flies past—and the female arranges it. Nests on artificial platforms, especially in a pair’s first season, are relatively small—less than 2.5 feet in diameter and 3–6 inches deep.