The Battle of the Taj Mahal 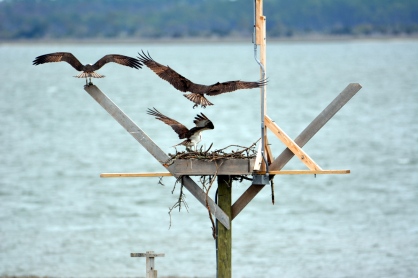 The Battle of the Taj Mahal

Harriett is crucial in her supportive role. Whenever she returns to the Taj Mahal, the fight between the two males intensifies. It’s a tactic O&H learned when they fought Reggie Raccoon two years ago: She returns to the platform, the enemy becomes distracted, and Ozzie comes in for the hit. 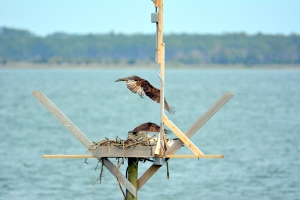 On the 1st he hit Ivan from the blindside and left him with a gash just above his right thigh.

The 2nd strike was less effective, but Ozzie did tear several feathers off The Brute’s left wing.

By the 3rd strike, Ivan had caught on and was more vigilant. Just before Ozzie struck, Ivan turned and they locked talons for what seemed an eternity. There was screeching and screaming and feathers flew.

When they finally disengaged, Ivan flew to the river bank. He did not seem deterred and nonchalantly preened his flight feathers. 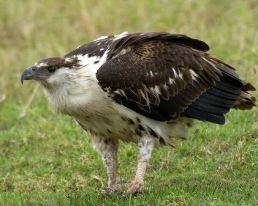 The fight had just begun.

The Brute recovered from his surprised beating. Surprise quickly faded into meanness.

Ozzie could see that Ivan was a killer. The Brute’s eyes were cold, cold like a shark’s. Ivan did not seem angry. He did not seem afraid. He seem bent on killing, as he leaped off the river bank toward our two heroes.

“I’m going to have to kill this bird” thought Ozzie.”He’s not normal. He’s crazy, not wired right, some kind of psychopath . . . I’ll have to kill him all right.”

Mother nature has no mercy.

“Did Hurricane Arthur have mercy on our nest last year?”

“Mother nature does not care.” The thought reinforced Ozzie’s conviction.

Once again O&H teamed up to do battle.

“Two versus one is a good thing,” thought Harriett.

But she was afraid. This guy was big and strong and crazy.

The Brute hit Ozzie hard and gashed the left side of his forehead. Harriett shrieked and came down like a hammer upon The Brute’s back.

Her talons were outstretched as if diving for fish and stabbed deeply into his flesh.  For just a second, one of her talents got stuck beneath the Brute’s spine. She had a split-second flash/vision of being torn to pieces, but she broke free and flew straight up to escape.

An instant later Ozzie came up from below and crashed into The Brute’s right leg and upper torso with all his strength.

O&H did some real damage. Ivan the Terrible once again flew to the river bank to reconsider his options.

“I don’t think he is reconsidering at all,” thought Harriett.

“I think he is just crazy and full of meanness. He just wants to fight. I think he likes to fight. God forbid if we can’t turn this psychopath away.”

At dusk, just before nightfall, O&H were back in their nest. They could see The Brute limping at the edge of the marsh, just in front of the Doctor’s giant nest. 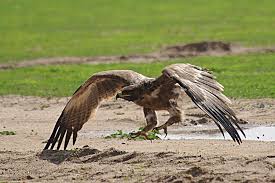 “I should finish him now,” thought Ozzie.  “Mother Nature has no mercy. Remember?”

“He might come back tomorrow or next week,” said Harriett.

Ozzie fluttered up to the Taj Mahal’s highest perch. From there he could see Ivan the Terrible nursing his wounds.

“I should finish him right now. I can dive from here, at full speed, both talons extended and rip out both of his eyes.”

“Do it! Finish him!”  encouraged Harriett.

Ozzie was surprised at Harriett’s thoughts. They seemed uncharacteristic of her. 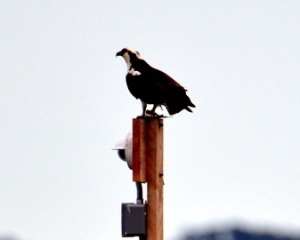 Ozzie stood perched upon the 9 foot spire. He could see Ivan limping along the marsh. He trained his keen eyesight onto the head of his enemy. He adjusted for what he was about to do, for the wind velocity.

“One devastating strike, talons outstretched at full velocity. Then it will be finished.”

“Do it!”, squawked Harriett once again.

Ozzie stood on the 9 foot spire, contemplated his anthropomorphic morality, then he did what he had, or had not, to do.