What follows is amazing and hard to believe.  It is all factual and documented by way of digital photography.  It is truly hard to believe. So much has happened over the past 36 hrs, the Doctor can only hope to present a brief outline of events. He promises to elaborate as soon as possible.

Here are the facts up to this hour:

The platform lay on its side like a wounded warrior. The Doctor and the Female that lives with him heard him groan when they inspected the carnage at daybreak.

Just leaving the dying warrior lying in the mud and oyster rock, on its side drowning, in The North River was not an option. Something had to be done.

If you watch the whole thing, you will sense the mood of the morning.

See how The North River cares nothing for the heroic Wooden Warrior.  Mother Nature again?

The mood of O&H’s followers was somber.  The nest and platform was destroyed.  Tweedy had drowned. No ospreys are to be seen.  No telepathy from Harriett.  Mother Nature not caring.

This morning a group of the Doctor’s friends showed up.  Even Jimazing flew in from where ever he flies in from. 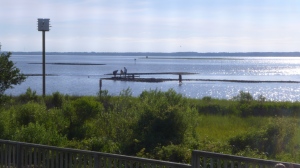 Their intention was to help the Doctor do what had to be done, what ever that may be. Perhaps reconstructing what remained of the platform or hauling it to the place it should be hauled. The 6 x 6 treated piling supporting the platform had broken off at the waterline. None of the humans could understand it. The final consensus is that there was a large knot at the site of fracture.

It was just bad luck the piling had this unseen flaw and that it happened to be at the waterline. None of the humans suspected a class 1 hurricane could take the platform down.

This group of O&H friends thought it best to reset the platform back into its upright position. Why? They really did not know why. It seemed the right thing to do. Maybe to pay respect; maybe to change the ugliness of the sight; maybe to show the Doctor their empathy… I think each volunteer was having different thoughts with the singular purpose of just doing something to improve the situation.

So, setting the platform up right became the plan.

It would only be 7 or 8 feet high, but what else could be done? Incredibly the camera is still working, even after being submerged during the last two high tides. Perhaps O&H would like to build a frustration eyrie.

Please excuse the Doctor.  He desperately wants to continue this tale, but it is past 11:00 o’clock.  Like any and all organic life forms on planet Earth, he needs sleep, preferably a consistent sleep wake cycle, adequate nutrition, food shelter and love.

The Doctor has learned this the hard way, so please have patience while he does his best to live a healthy life style.  There is no doubt he will continue describing these amazing, hard to believe events at his first possible opportunity.

There is good evidence that Tweedy is alive.

4 Responses to Amazing – Hard to Believe