The Creation of Beauty

“There is no better place to contemplate the creation of beauty than in your own back yard; a spider web, a blade of grass or a robin’s nest half way up your shade tree. In the springtime the beauty of life radiates so brilliantly that even humans stop and take notice”.

“From Photosynthesis to Oxidative Phosphorylation, living organisms are pumping out ATP like an interstellar nebula throwing off cosmic radiation”.

The Aesthetics of Osprey Eggs

Osprey eggs are considered one of the most beautiful of all bird eggs. There is no contest among the other raptors. They have long been admired for their unusual coloring. Most osprey eggs have a brownish mottled coloring.

Others have rich browns,

and some have a white to cream-colored background covered with dots. 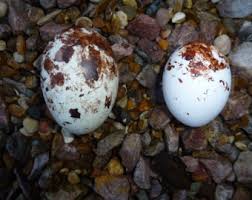 This particular clutch is very cinnamon.

Clutch-mates tend to have some artistic consistency, but there is enough variation that one wants to admire each entire clutch as an avian work of art.

The stunning beauty of osprey clutches was not lost on the old naturalists. In the 19th Century the hobby of egg-collecting, was very popular.

Osprey egg-collecting played a major role in the population decline in the 19th and 20th centuries. There was even a little journal devoted to it, “The Oologist”. 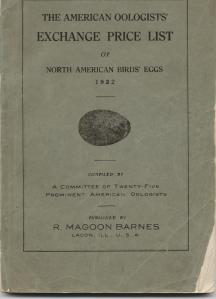 There are still museum cases full of old Osprey eggs in Europe. Some are well preserved in these curio, throwback collections. 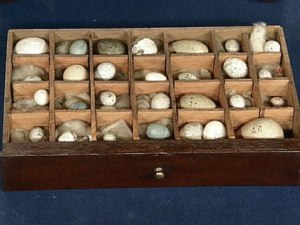 2 Responses to The Creation of Beauty