Courtship in ospreys centers on food and nest sites. In migratory osprey populations, males and females arrive at the nest site separately, the male often arriving several days earlier than the female. Male ospreys sometimes perform a conspicuous aerial display near the nest site. This display usually occurs during early courtship, and serves to attract their mates and to threaten any intruder. 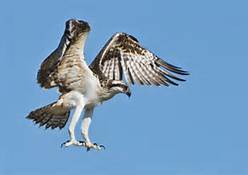 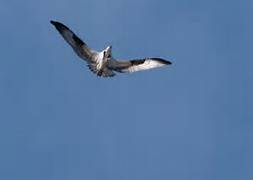 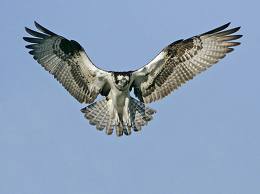 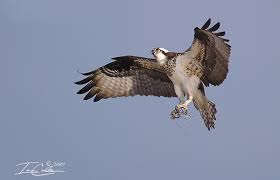 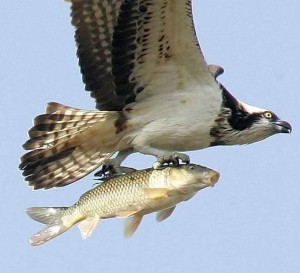 This courtship dance, often called “sky dance” is a spectacular, wild yo-yoing display of flight.  The male impresses the female with his catch and then, after briefly treading air, drops down a hundred feet, before treading air again and then quickly rising.

This video is pretty good, considering it was made with an i-phone.

Once a pair has established a nest, the male begins to deliver food to the female.

During the courtship period the male continually offers food to the female. This behavior continues throughout the breeding cycle, and is critical for pair bond formation and female fidelity.  This feeding continues until the young fledge or the nest fails. Generally, females that receive more food are more receptive to mating attempts by the male.  Females beg for food from their mates, and occasionally from neighboring males if they are not well fed by their mate. Males may protect their paternity by feeding their mate well. They may also protect their paternity by guarding their mate from other males and copulating frequently when she is most fertile (several days before egg laying).

If the dance is spectacular foreplay, then the sex itself is fast and furious, lasting just a few seconds. Don’t miss the next post.