There was either a mouse in the house, or a cat or a rat. 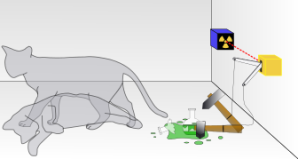 Schrödinger the cat: a cat, a flask of poison, and a radioactive source are placed in a sealed box. If an internal monitor detects radioactivity (i.e. a single atom decaying), the flask is shattered, releasing the poison that kills the cat. The Copenhagen interpretation of quantum mechanics implies that after a while, the cat is simultaneously alive and dead. Yet, when one looks in the box, one sees the cat either alive or dead, not both alive and dead. This poses the question of when exactly quantum superposition ends and reality collapses into one possibility or the other.

Schrodingger kept disappearing, appearing, and reappearing. The Doctor got so frustrated he gave it to the animal shelter in the 1st multi-verse he was able to enter safely.